E-Government and the Missing Dimension of Citizen’s Participation

The plan to ‘establish Europe as the most competitive and dynamic knowledge-based economy in the world’ promoted since the Lisbon Summit of 2000 was written into the eEurope 2002 Action Plan. By the time E-Europe 2005: An Information Society for All was published, the inclusion of the concept of ‘participation for all’ was added to the competitive agenda. Its objectives are: to provide a favourable environment for private investment and for the creation of new jobs, to boost productivity, to modernise public services, and to give everyone the opportunity to participate in the global information society’ [1].

Critical to its ability to deliver this is ‘its aim to stimulate secure services, applications and content based on a widely available broadband infrastructure’ [1]. Technology, in terms of the infrastructure of the broadband, was seen as the key problem in delivering the Action Plan and establishing competitive advantage for Europe. In line with the competitiveness drive, the private sector is directly invited to work towards e-Europe objectives with the support of the Commission and Member States. The promise of success, in terms of ‘a significant impact on growth and productivity, employment and social cohesion’, is once again offered as underpinning the Information Society [1]. 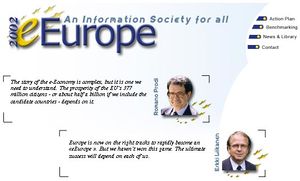 The Cap Gemini Ernst and Young benchmark surveys [2] of Europe’s online public services completed for the European Commission DG Information Society describe progress in establishing Europe’s online public services. By 2003, while all countries have progressed at different paces, they report that in almost every country public service businesses score significantly higher than those for citizens and that the gap between the two is growing. They advocate the use of a more proactive citizen focused approach. The fourth survey, released in January 2004, shows the difference between the targets of businesses and citizens steadying, but remaining at a 20% difference in online sophistication and a 30% difference on full availability on line.

In the Republic of Ireland Information Society (IS) policy was co-ordinated from the Ministry of State for Information Society, located at the very centre of Government in the Department of the Taoiseach, and it reflects this trend where competitiveness is emphasised first and foremost and citizen’s participation comes belatedly onto the scene. The first Government Action Plan was written in January 1999 and the second in 2002. Wider Information Society engagement was the goal and to achieve it eGovernment was seen as central. The Plan for eGovernment focused on the objective of having all key public services that were capable of electronic delivery available on line by 2005 as per European targets. The focus was on improving internal efficiency and back- office administration as well as stimulating wider engagement with ICTs ‘in the business community and the public in general’. [3] The citizen is interpellated as the ‘customer’ or consumer and the business community are specifically named in the discourse rather than other communities of interest. The model developed to deliver the on-line public services was the ‘Public Services Broker (PSB) developed by the Reach Agency. Their approach which would ‘In other words [..] amount to a virtual corporation delivering quality services on the basis of client needs and achieving overall efficiency gains across the public sector’. In the ‘Foreword’ to the 2002 Action Plan on Information Society the Taoiseach made direct reference to ‘the business’ of Government, clearly envisioning the transactional dimension as exclusively central to the programme of e-government. In this Plan ICTs are seen as important for reshaping government services around user needs first and in providing competitive advantage second [4]. Brief mention is made of making possible new connections between Government and the citizen, but the emphasis is on better service delivery.

The development of online transactional government in the Republic of Ireland was advanced relatively quickly and competitively. In the 2001 EU Benchmarking Exercise Ireland performed stronger than all member states [4] and in the UN and ASPA Benchmarking study it fell within the ‘high e-Government capacity’ category and scored 2.16 in the global benchmarking ranking. [5]. However, the focus on business and commercial applications was notably stronger than that on citizen’s participation. That is, it was clear that the balance between efficiency and democracy was dangerously skewed towards efficiency and competitiveness as opposed to democracy.

The 2003 Caps Gemini survey on transactional government [2], i.e. public services on line, showed the Republic of Ireland and Sweden as having the highest level of on-line sophistication, with the Republic of Ireland progressing beyond the level of two- way interaction, and sophistication online having increased to 50%. Yet this survey again exposed that greatest progress had been made by online services for businesses rather than for other communities of interest in all countries.

‘To conclude, Caps Gemini Ernst & Young believes that further growth beyond the stage of interactivity requires a clear political vision and committed leadership to eGovernment as an integral part of national governmental change programme; and a greater emphasis on the citizen. This is required to achieve not just the target of availability, but to deliver the more important aspiration of a transition to a citizen-focused governmental approach’ [2]

In response to this type of critique, the Irish Information Society Commission’s 2003 report on eGovernment brought the citizen and the question of democracy into the discourse in ways that were not previously present [6]. The prioritising of citizen’s participation advances Considerably in this report which argues that E-Government has the

Service delivery slipped down the scale and ‘the centrality of the citizen’ became ‘the key concept in the provision of e-government’ [6]. The report congratulates the government on demonstrating leadership in developing the PSB model and in its performance in the EU benchmarking of available online public services, but the strong critique offered is that the citizen-centric model was yet to be engaged and that the potential of e-government was ‘more that an automation of government services’ [6].

In Northern Ireland efforts to introduce e-government have not followed the same pattern. The general programme for modernisation, outlined in the White Paper Modernising Government (1999) and in Reforming our Public Services: Principles in Practices (2002) put particular emphasis on government in the Information Age and in addition to this the governance style, which marked constitutional renewal in Northern Ireland, emphasised partnership and placed consultation high on the agenda [7]. The Central Information Technology Unit (Northern Ireland) established in 1997 and now part of the Office of the First Minister and Deputy First Minister, has lead responsibility for promoting, monitoring and reporting on Electronic Government in Northern Ireland. Their vision is:

The Information Age Initiative, through its action plan Leapfrog to the Information Age[8], articulated a strategy to develop a knowledge-based economy in NI and called for joined up e-government. Four principles guide its development: choice, convenience, simplicity and inclusiveness. The Northern Ireland Executive underlined its commitment to electronic service delivery in the Programme for Government agreed in March 2001. In July 2001, the Executive Committee endorsed targets for electronic service delivery. Departments were to have by the end of 2002, 25% of all key services delivered electronically. In line with the European driven UK targets all key services should be on line by 2005. The Executive further articulated its aims in the Corporate Strategic Framework with its vision for a ‘modernised efficient government, alive to the latest development in e-business and meeting the needs of citizens and businesses in Northern Ireland’ [9].

In the Cap Gemini Ernst and Young surveys of Europe’s online public services [2], in the section reporting results by country the UK scores highly, but not as high as the Republic of Ireland. In October 2003 the UK came 8th in measurements of online sophistication and sixth in measurements of being fully available on line. The Republic of Ireland in the same year came third in the first measure and fifth in the second. These figures measure development of transactional e-government at the level of country and so do not present figures on the province of Northern Ireland, which may or may not reflect the overall trend in the UK.

Worth emphasising however is that in the UK there is also a strong agenda of consultation in the Modernisation of Government programme, where a range of governance mechanisms stress measuring performance outputs in client communities and emphasise partnership structure characterised by dialogue and communication. In Northern Ireland there is a particular culture of consultation built into law, such as Section 75 of the Northern Irish Act where consultation is required.

Once we turn our attention from the transactional to the democratic dimension of e-government a set of entirely new questions emerge and we have no measurements so readily available to guide paths to progress. How to avail of and implement ICTs to best facilitate better governance is probably the key democratic question faced by e-Government today. If the infrastructure of broadband is successfully put in place how are citizens, communities, as well as businesses, to be networked into government? We ask this in a new technological context of living in an information society where citizens can be linked into the network of governance as consumers of services, as electronic voters, or as agents of policy making and/or as participants in governance structures, where some may be de-linked through lack of access, and where all can be held under surveillance.

The possibilities of participation may have altered significantly in networked society and the e-Government agenda is currently grappling with the inherent potential and shortcomings that the shift to electronic government has/will have on democracy in general, but more specifically on questions, levels and quality of participation. The advances in the ICTs sector when applied to the question of government can radically alter the modalities of democracy - they can enhance the types of democratic structure in place, or they can de-democratise through lowering the quality of participation in decision-making. For example, popularity polls on personalities and policies, where citizens directly control politics at the touch of the button, could be developed. Likewise, the low participation rates in elections could be enhanced through the availability of ICTs. As the e-inclusion debate has indicated, whole sectors may be excluded through the shift to electronic forms of government because of the digital divide. On the more positive side, personal computers and the Internet are reasonably widely available to ever-wider sections of the public in the richer countries and could be made available to all. These could possibly facilitate information dissemination and of course transactional government. Computer networks are good at storing, manipulating and quickly transmitting data so they could support improved processes of participation. Because of this they could, in fact, invigorate democracy. How could e-governance tools be used to support and develop more holistic working in government, better policy-making and stronger accountability for decision-making? How can ICTs be used to support the democratic process and where can ICTs better enhance the quantity and quality of participation in governance? These are just some of the questions that arise if we turn our attention to renewing democracy through the use of ICTs in the Information Age. However, these debates are only now emerging as real and they arise only in the context of established modes of governance in the various jurisdictions of Europe. It is to these we now turn, that is, to the political and social contexts of governance in the Republic of Ireland and in Northern Ireland.